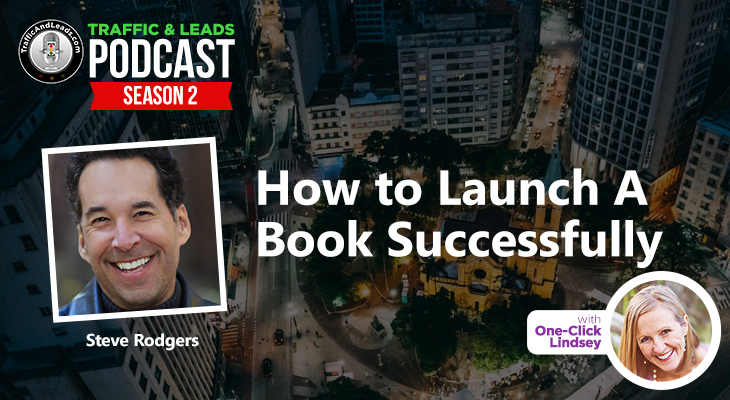 In this “Traffic and Leads” podcast with “One-Click Lindsey” Anderson, we learn how business and lifestyle consultant Steve Rodgers launched his first-ever book, “Lead to Gold: An Entrepreneurs Guide Through Transition, Transformation and Evolution,” successfully — chiefly using his experience in real estate marketing and social media.

Rodgers, who’s from San Diego, is the founder and chief executive officer of The Alchemy Advisors, which offers consulting, coaching, speaking and training services for businesses. Prior to founding that company, he worked in the real estate business for 20-plus years, including a 15-year run as the CEO of Prudential California Realty and then a five-year stint as CEO and president of San Diego’s Real Living Lifestyles Real Estate franchise.

Before releasing “Lead to Gold” in 2016, Rodgers spent several months promoting release of the book through his website and social media channels. While he was in the real estate business, Rodgers learned how to promote new home listings by using such marketing tools as multiple listing services, newsletters, press releases, and later Zillow, Facebook and Twitter, plus creating such media as fliers and posters. And, to attract new real estate clients, he learned how to build his channels on such avenues as Facebook, Twitter and LinkedIn. With such experience under his belt, he went about promoting his book in much the same way.

Using mostly his social media skills, which included the posting of pictures of him with a former real-estate boss by the name of Warren Buffett, but also buying some Facebook and Google advertising and seeking a bit of consulting just prior to the actual launch, Rodgers saw some eye-popping numbers the day the book was released on Amazon. He hit number-one, best-seller status in two Amazon categories on launch day, and within two weeks, he would sell nearly 8,000 copies of “Lead to Gold.”

Asked in this podcast to list three top things that led to the successful book launch, Rodgers cites these: 1) Having a well-connected group of “ambassadors,” or friends and business acquaintances he had met through his past social media channel building; 2) using an effective email campaign, which is a tool he also had wielded during his real estate marketing days, through newsletters and the like; 3) his own social media channels and skills.

Also in the podcast, Rodgers discusses how he used Facebook and Google AdWords near the end of the launch and to continue promoting the book, and he suggests several ways rookie entrepreneurs can build their businesses and careers. Those suggestions include social media, of course: Starting on that route by building your profiles on LinkedIn, Facebook and Twitter and then building friends, fans, followers AND clients on those channels.