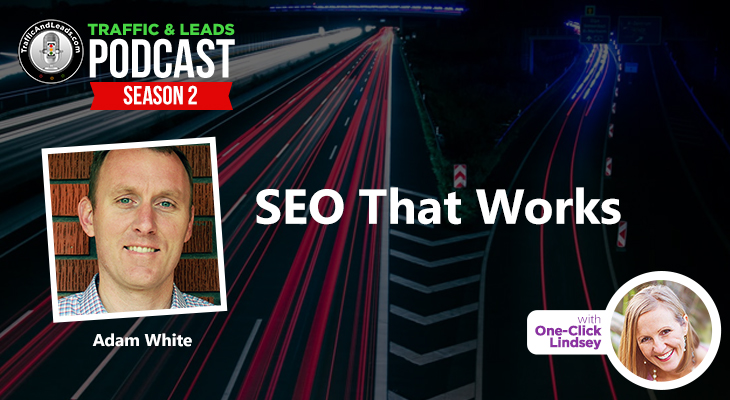 In this “Traffic and Leads” podcast with online marketing expert Lindsey Anderson, Adam White, founder of SEOJet.net, discusses how a tongue-in-cheek Facebook post he wrote about the popular TV show “The Profit” caught the attention of program host Marcus Lemonis. The resulting Facebook rapport between White and Lemonis went viral and delivered some 60,000 visitors to White’s website, which centers on link management software, in just a matter of days.

A search engine optimization professional since 2002, White is an expert at building backlinks and has helped some 400 businesses drive traffic to their sites. Early in his career, he grew weary of what he calls “Guess-E-O,” or trying to guess what keyword might generate web traffic and then wait two months to see if that keyword worked. He also often simply anchor-linked text on his site to “SEO services,” which was part of his company name, as part of his SEO That Works strategy.

However, about the same time, Google caught onto an anchor-text strategy that White and many other SEO experts were using and — even more so the past four or five years as White relates in this podcast — focuses its attention on those brands that successfully build their SEO on backlinks. (As the host of this podcast, “One-Click” Lindsey Anderson, explains, “backlinks” are one of the major ways that Google determines whether your site should come up first in search engines or not. The website links to which the most people “point back” are deemed reputable and “legit” by Google and get better search results.)

Realizing the importance of both anchor links and backlinks, White went to work and studied how big companies were getting backlink rewards from Google, conducting countless numbers of searches. He developed a dozen anchor-text strategies and then created what he calls “link maps,” all of which became the core of his company’s software business. “That was kind of the genesis for SEO Jet,” White says. “SEO Jet literally is software that will build out these maps for any page that you’re trying to rank and will tell you, ‘These are the links you need to get in order to match what other number-one sites have in their link profile.’”

White already was generating success from his SEOJet software when, one day, he decided to create a Facebook post chiefly as a fan of CNBC’s “The Profit.” In “The Profit,” which is akin to ABC’s “The Shark Tank,” host Marcus Lemonis goes into flailing businesses and decides whether they are worthy of him investing his own money in the business. Once he becomes part owner, in effect, he applies his popular strategies to the businesses and helps them turn things around.

White says he knew that simply writing a post about how he loved Lemonis’ show would be “white noise,” because so many people do follow the show and probably wouldn’t even notice it. So, he titled his post “How ‘The Profit’ Is the Worst Show on TV.” The content of the piece actually was a tongue-in-cheek approach, with White gushing roughly in 1,000 words that the show was so compelling that it kept him watching late into the night and he couldn’t get any sleep. He posted his piece to “The Profit” Facebook page, shut off his computer for awhile to spend time with his family, and turned on his phone a few hours later while sitting in bed. He discovered that Lemonis had seen the post and shared it with his 200,000 followers

Because of the “worst show” headline approach, Facebook had “exploded,” White says, but feedback from Lemonis’ followers was initially negative because of the headline. White wrote a reply to Lemonis that he was really a fan of the show; Lemonis reposted that comment; and many more followers actually started reading the entire content and began commenting positively. Lemonis even spent money to promote the posts on Facebook, and “over the course of two or three days, he probably sent 60,000 visitors to my site,” says White. “Then, he follows me on Twitter,” where Lemonis has 1.3 million followers, and Lemonis later sponsored a rolling billboard that played upon “the worst show” theme.

Eventually, White and Lemonis built a rapport, and White was hired to perform SEO work for Lemonis’ show and business.

It was while he was working for Lemonis that White realized his concepts for SEO Jet were “working out” and he built an advanced 2.0 software version for his business, which now is really booming.

“By creating a negative headline,” White says, “I just touched on a sensitive point where I knew people would respond to it. Eventually, it made the most people come to my side more.”