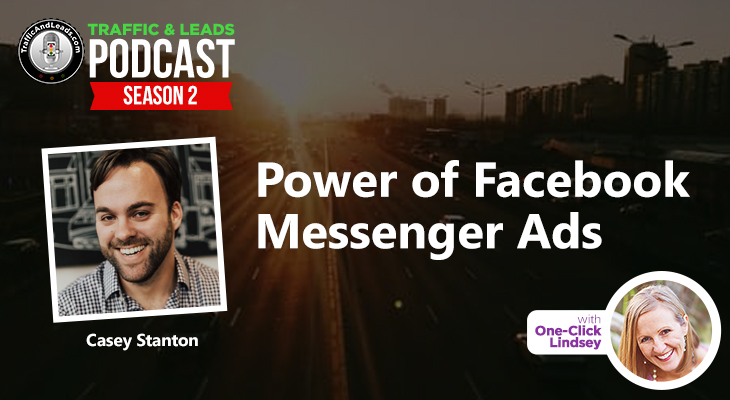 You can’t be just an online marketer and expect revenue to come pouring in — you also must be a salesperson who knows the latest trends in marketing technology that can help you get closer to your customers. That’s the gist of this “Traffic and Leads” podcast with online marketing expert Lindsey Anderson, who discusses with Casey Stanton, chief marketing officer of Tech Guys Who Get Marketing, how to become a salesperson as well as a marketer.

Stanton also highlights one of the latest trends in marketing technology, Facebook Messenger ads, and the early success his company has had with that Facebook tool.

Tech Guys Who Get Marketing is just as it says in the company’s URL: It comprises a bunch of tech guys who help businesses of all sizes overcome marketing and technology hurdles. One of Stanton’s specialties as chief marketing officer is how to convert a marketing-minded business owner to become a salesperson, too.

“I think a lot of business owners kind of relax a bit when they do online marketing, because they think the marketing should drive the sale and if it doesn’t, it’s ‘the fault of the marketing,'” Stanton said. “What I’d like to discuss here is that it’s the fault of the entrepreneur for not selling more effectively. One of the easiest things you can do as a business owner, mid-size, or big, or in between, is to call your prospects and sell them one-on-one.”

Back in 2008 and 2009, companies found themselves profitable through product launches that followed what Stanton calls “the whole one-click/copy/cash world of automation,” or “just send out these simple emails and make boatloads of money.” Now, though, “we have to fight through a lot of noise in the marketplace,” such as the overwhelming number of emails, texts or promotional messages that business owners will see each day in their mailboxes or on their phones.

“To cut through that noise,” Stanton says, “the one thing we have, which is going to be hard for the robots and chat-bots to take away from us, is our ability to sell direct to someone, to have an honest conversation with them. I think this is the evolution of a business owner: You use marketing to drive in leads with a marketing campaign and then you sell those leads. If you can sell them through marketing and automation, then great.

“But the others? Get on the damn phone, call them and sell them.”

Even if a business launches a $50 product, it’s worth a businessperson’s time to make follow-up calls to hesitant clients, Stanton added, because “it’s actually a $50 front-end offer with a lifetime value of a customer of $500, or $600, or $1,000, or $10,000 … it’s worth going a little for ‘the negative’ with energy from yourself to sell that person so they can be a great customer long-term.”

Tech Guys Who Get Marketing is a larger business, which includes a sales force of its own, and meets many of its customers face-to-face by attending events, Stanton says. It may take six to 12 months or longer over several events to build relationships and close deals with customers with that approach, “but when we start working together, we tend to work together forever and we have customers for life.”

One of the newest ways to single out customers who need to be sold “face to face” is through newer Facebook ads that, when clicked, open up Facebook’s Messenger app with a pop-up box through which you can start a conversation with the Facebook user/potential sale. Stanton and Tech Guys Who Get found early success with this newer chat-bot tool recently when trying it for a larger client.

Messenger offers advertisers one large audience. Since Facebook first notified users in 2014 that they no longer could send private messages through Facebook, but must do so through its Messenger app instead, Messenger has grown from 500 million users in late 2014 to 1 billion last year. It is the third largest social network, tied in that ranking with YouTube and trailing only Facebook and WhatsApp. (Messenger, like WhatsApp, is especially popular with those people who have limited texting plans on their cellphones.)

Marketers can gear their Facebook ads to link to their company’s website, and when users click on that link, they go to Messenger and find the chat box with the company. “So, as long as someone on my team or my client’s team are standing by with their Facebook pages (on the desktop) or the Facebook Messenger app (on a cellphone), they are going to be able to reply in real time,” Stanton says. “They get a notification on their page and it says, ‘Lindsey, you just started a conversation with Tech Guys Who Get Marketing,’ and I swipe and open it up and you ask a question, and we have a two-party conversation. And, I can send you photos and link you to important documents.

“Most importantly, I can get you on the phone immediately and I’ll say, ‘Hey, can I call you?’ And you’ll say, ‘sure,’ and we have a sales conversation right then. You will not have to wait for any emails to fire within the next 24 hours from MailChimp and then a follow-up and maybe somebody unsubscribes and all that garbage. I can get direct to the sale and make a difference.”

Facebook offers advertisers varying rates for the new Messenger ad tool. Rates can be based on cost per conversion, cost per acquisition, cost per action, or the number of people you want to target with the ad overall. Stanton called the latter “the print approach,” or, “I’ll pay The Wall Street Journal, in 1950, ‘x’ amount of dollars for every 1,000 people who see my ad in the paper, and we call that cost per mill, ‘mill’ meaning a thousand, so cost per 1,000 views.”

Not long before this podcast conversation with “One-Click Lindsey,” Stanton and his company tried the new Facebook Messenger ads with a client of theirs. The ad garnered 47,000 impressions; the number of links clicked was 251; and, of those links clicked, “15 of those people started a conversation with us.” Thanks to the aid of the Tech Guys sales department, and the new Messenger chat tool, 12 of the 15 conversations chimed a sale. In the long run, each sale generated $550 in lifetime value per customer, and “for every $13.22 we spent on Facebook, we essentially made $550.”

Stanton says the numbers from that initial Messenger campaign could have been better, yes, but they were good enough that the client plans to try the Messenger approach again, more aggressively, with its next campaign launch.

As for smaller entrepreneurs who feel they’re strong at marketing, but not in sales?

“I feel everybody has a great opportunity to be a great salesperson, but there are people who are cut from a different cloth that are just naturally gifted,” Stanton says, “and you should pull those people onto your team.”

“One-Click” Lindsey also has started Facebook Messenger ads with one of her clients and seen good results, which she plans to share on a future “Traffic and Leads” podcast.

“Don’t let technology be a crutch for you to not get out there and connect with people,” she says in concluding this podcast episode. “The more people you connect with, the more sales you can make, and the more your name will get out there.”